The Har Zion Temple and Imam Mahdi Islamic Centre sit side by side in Thornhill, even sharing a parking lot.  Their current refugee sponsorship project, however, brings them closer than ever. 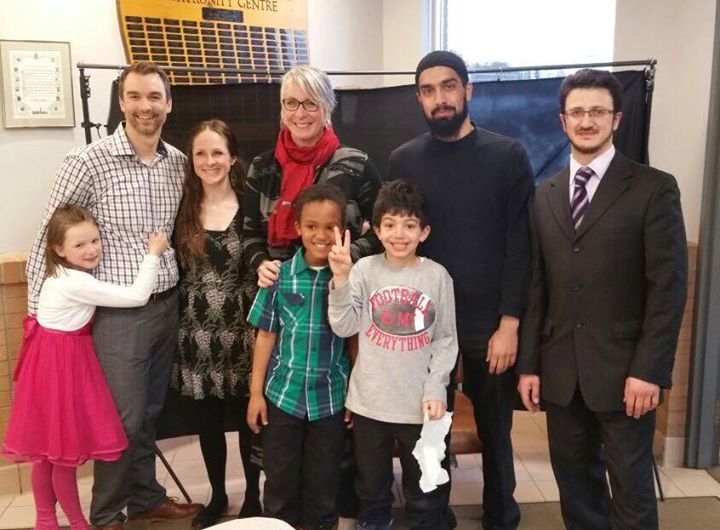 When the synagogue was interested in sponsoring refugees, it contacted the mosque, which was also considering refugee sponsorship.  The houses of worship partnered in the sponsorship process and are now trying to raise a joint target of $60,000.

Rabbi Cory Weiss says the co-operation is “groundbreaking, and brought us together in a way that nothing else has.”  Alireza Torabian, who co-chaired the sponsorship efforts at the mosque with Afsaneh Baigi, says, “We are very proud that we can start a project and show Canadians that different cultural groups and religions can work together in Canada on the same common cause.”

In another part of the province, two faith communities are also joining forces to welcome refugees.  Muslims and Christians in Thunder Bay have been collaborating and have discovered unexpected rewards along the way.

Right to Refuge operates out of Grassroots Church in Thunder Bay, helping to sponsor refugees.  When their first refugee family arrived, Heather Denis of Right to Refuge wanted to make their transition smoother by surrounding them with people who belonged to their faith community.  She reached out to the local masjid (mosque) and asked them for support.

Not only did the mosque welcome the Alkweyder family, but a month later, members of the mosque also attended a potluck at Grassroots Church.  Then they approached Denis with a proposal to hold a fundraising dinner together with the church to raise money to sponsor more refugees.

The dinner was an enormous success, raising over $30,000 from donors in Muslim, Christian and other local communities.

In Cobourg, Ontario, churches teamed not only with Muslims but also with secular groups. The Better Together refugee sponsorship group is a network of 10 Northumberland-area churches that almost simultaneously decided they each wanted to sponsor refugees.  Then they found other churches – all different denominations - that shared their goal.

Gloria Peters of Better Together says, “What is unique about us is that we started as a group of Christian churches and quickly expanded to include many people who profess no particular faith.”  One of these groups is the local Rotary club, which has funded one family and provided representatives on Better Together’s executive and fundraising committees. The Rotary Club explains, “The motto of Rotary is ‘Service above Self.’  The Rotary Club of Cobourg, while not sharing exactly the same vision as the churches forming Better Together Refugee Sponsorship, does share many of the same values.”

Abeer Alsalihi, a Muslim, is a Syrian translator working with Better Together.  He teaches churches about Syrian culture, and in return, they have embraced him. “Nowadays, we are all going out together and having fun,” he says. “We like and respect each other.”

Heather Denis described the reason she cherishes Right to Refuge’s partnership with the masjid: “This new relationship developed organically, which is one of the things that makes it so special.  It was not forced, it was unexpected and it is playing out beautifully.”

Might the collaboration of faith groups foster a greater sympathy for each other?  Heather Denis hopes so. “No agenda relating to interfaith dialogue has ever been discussed, but the natural outcome has been an understanding between our faith groups.”

This story was originally published by interfaithconversation.ca.