God Took Me Outside

This church has stood on this ground for eight hundred years, and the Lewisian Gneiss that forms its foundation has been on earth longer than any other stone. The burial grounds outside its walls have been in use for five hundred years more and hold the bones of Scottish royalty. Sitting here shivering in this wooden choir stall, wrapped tightly in a woolen blanket and looking up at the medieval carvings on the pillars above me, I feel small and insignificant amongst the vast human history still whispering in this place. 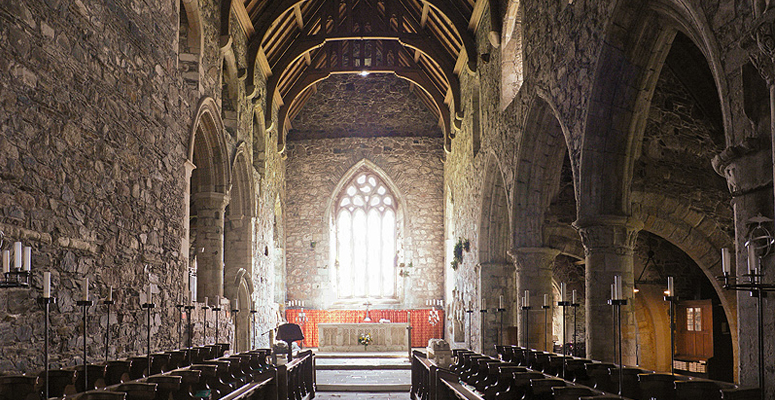 Iona Abbey does this to people.

Feeling far from home is not new to me. I’ve been on the move since I was 17, chasing short-term adventures in different parts of Canada for almost a decade. I’m approaching my 30s, and it’s hard not to feel slightly out of place at gatherings of friends who are engaged, married, buying their first home, or expecting the birth of their first child. I have never owned furniture except a rebuilt IKEA chair small enough to fit in the back of my parent’s hatchback. Jumping from one job contract to another (and in my current case, crossing an ocean to accept a position) has become normal for me. My well-travelled suitcase is becoming lighter each time I leave home, as cutting my packing list down to its skeleton makes it easier to repack when I return, arms full of memories and people I wish lived an easy commute from wherever I land next.

The monks who spent their lives in this abbey left everything behind to enter a world they didn’t know. They were sent out in pairs to minister to the Celts and Picts of Scotland by building relationships and making themselves useful. Looking up at the stained glass windows that remind me of beauty in brokenness, I wonder what my God thinks of what humanity has become. Are we still beautiful to him? Does he still wait for us to look up and see him in the eyes of the panhandler, drug addict, low-income mother, refugee, politician, mentally ill? We’re told on Sundays that we’re still his children, no matter what comes, but can we truly call ourselves siblings if we refuse to see the humanity and familial ties in potential friends that we call strangers?

My teacher was a homeless Palestinian living in exile from his own community, hated by the religious authority for questioning the blind pursuit of power in place of holding the hands and hearts of broken people. He welcomed in men and women who had been rejected and ignored by society for so long that they no longer fought for their worth as human beings. He travelled and taught by the grace of hosts who had nothing more to give than dry bread and a bare floor to sleep on. He was born in a barn and executed on a hill, and yet he is with me still. He is the voice in my head urging me to ignore social norms and look after the broken people I meet every single day. He has set a precedent I cannot ignore, so I help in any way I can.

Sometimes the world’s ongoing news feels like a riptide, pulling us under and far away from shore and rescue, drowning us in the constant barrage of tragedy. I nearly lost my faith in my teens because I couldn’t see the church working as one entity to solve problems that were so prevalent in my community. Instead of giving up entirely, I went to my church and sat alone in prayer. I asked my God to show me humanity’s kindness and altruism.

God took me outside.

He showed me my neighbours planting flowers in an elderly person’s garden. He showed me the annual dinner my church youth organize each year to build community. He showed me the weekly quilting meetings happening in our back room that give widowed women an opportunity to chat and connect with others. He showed me the volunteer work my church family members do each week without expecting accolades.

I found my faith in the hands and hearts of regular people – ones I am lucky enough to call family – and they brought me back to God and what it means to follow directions given to us over 2,000 years ago. Love your neighbour, care for others, and disturb the status quo to accomplish it.

Sitting in this abbey, 6,000 kilometres from home, I am thinking of the family I’ve left behind, thinking of the family my teacher left behind when he set off, age 30, to teach something he knew could get him killed. I think about the friends he met on the road, companions on the way, who hopefully taught him, too. And I think of how small he must have felt, a David taking on the Goliath Roman Empire and everything it stood for, walking alone away from his family home in Nazareth into a world and future unknown.

I am comforted knowing I am following directly in his footsteps.

I am in good company.