British Columbia is nothing but trees. At least to anyone with half a heart, the freeway disappears and the car sounds fall away like other people’s conversations in a Vancouver coffee shop while you’re having your heart broken. But I don’t know that yet, and anyway the mountains broke my heart first, and harder. Harder even than a father’s apathy would, which I am only starting to realize it could do. I press my little hand to the window, and it leaves a clear mark in the condensation. I imagine being out of the car. I want to be in the trees, barefoot in the loam with skin stippled green by the leaves. The glass separates me from the scene like it is a painting.  I choose to blame the window but really I know it’s not that. Nature is out of my league. My half-caf boyfriend would later try to tell me he was and it wouldn’t be true by a mile, but while the forest is far too good to say it I know, then as now. It is my first taste of unrequited love. 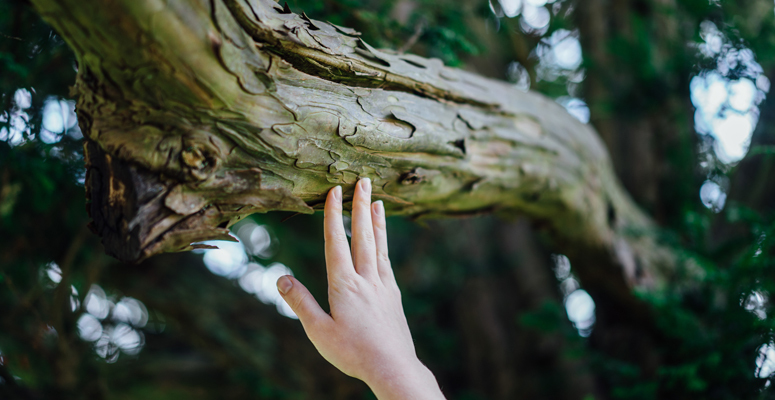 At three o’clock we pull over at a gas station. Stop, stretch, pee. My dad used to say “coffee once a day, shave once a week.” I do know that when we were lucky, he would rub the stubble of his beard against our faces, and we would struggle to be free but not really mean it. Around the gas station, the pines and rigid mountains have given way to dry grasses and low gentle-sloping hills. I walk to the farthest corner of the parking lot where I picture myself among the fields, fingers tip-skimming the rough heads of grass and breath like the holy spirit at Pentecost, in my hair, in my white dress, in my eyelashes. I stay on the pavement.

At my nondenominational middle school, my homeroom teacher sticks together two pieces of tape and pulls them apart. She chews gum and thumbs it to the board, showing us what it means to be used up. I don’t like being reminded of things, especially not in public; I worry they can see it written on my forehead. She forgets the gum there at the end of the lesson and it is left untouched, surprisingly, for some days. Its corners are just beginning to crust over before it is eventually cleared away by the janitor. I wish he hadn’t. I wanted to know what might have happened to it.

When the pastor says I am sinful, the only part of creation felled, I nod in agreement. I don’t have to be told. When the time comes to receive the eucharist I stay in lane and in my seat.

Weren’t we once able to commune? Back when we were innocent? I swear I remember a life where summer could never slip into autumn unseen. When our feet were in the mud. There was the smell of wheat-roasted bread that sustains; there were the pangs of juniper and childbirth. There were bodies shaped by lifetimes of running, dying, breathing, praying. The world then was not a landscape, but an oil painted with thick strokes and we were smeared all together with it. Where does the time go?

Everyone who lives in the Okanagan Valley remembers The Fire. Here brushfires are a part of the rhythm of our seasons, so that ash is as familiar as our snowfalls, but if you talk about The Fire people will know which one you mean. The Valley remembers it too. There are still deep lesions across the mountainsides where charred and blackened stumps mingle with tender new growth. In recent years, though, the young flora has given way to teenage saplings and the toddling fawns have more or less found their footing.

On August 16, 2003, a wildfire was started by a lightning strike near Rattlesnake Island in Okanagan Mountain Provincial park in British Columbia, Canada. The wildfire was fueled by a constant wind and the driest summer on record. Within a few days it had grown into a true firestorm. Thousands were evacuated from their homes, my family among them. For many of us, the fire served as a stark reminder that we still lived in a world where we could be subject to the consequences of a lightning strike. Here and there you heard the phrase act of god. A lone sprinkler was set on our roof, a sputtering testament that modern man is not immune to superstition in times of crisis. My parents made a tape of our house’s valuables for the insurance company and we evacuated across the lake.

When the fire came we were all with one accord in one place. Nowadays, I understand a little better the anxiety of half-paid mortgages that afflicted the adults as they tried distantly to make out which familiar streets the fire had crossed and which neighborhoods it had spared. I can maybe imagine now their minute by minute estimations, their reckonings of probability, and the bargaining that would have selfishly and guiltily concerned only their own homes, not their neighbors’. I was just a little too young for things like that to really touch me then. All I knew was that the light of the fire was beautiful against the night and that its motion held my gaze like running water, and like water cleansed. I prayed with my friends and family for it to stop, but I didn’t really mean it. Luckily, blessedly, it answered my feet, not my face, and kept coming.

In the end the fire didn’t consume our house, just kissed its forehead, but the smell of it spoke from the walls forever afterwards. A little later my mother made a rule that we should always take off our shoes when we went inside.

There is a slope just outside Enderby where the last turn of June sees the raspberries ripen along the back roads near trickling creeks. A friend of mine tells me they aren’t raspberries, actually, but salmon berries. I am skeptical, but really they are unlike anything I’ve seen in a grocery store or even domesticated in a handpicking patch. They are tarter, rounder. Each one when bitten bursts across the tongue with a sour pang that surprises again and again and again. They are heaven

You can never overeat when each berry is a treasure to be hunted for, so we graze for hours, for days. There are feasts for weeks. There is a hum of clumsy bumblebees and we are heady with communion wine. It is a sacrament:  Eat my mother says, and my father kisses her in approval.