I never really knew my grandfather. Having been so young at the time of his death, the few memories I have of him are necessarily supplemented by photographs and tales told to me by my dad, my aunts and uncles, and my older siblings. Until recently, I haven’t thoughtfully considered how much I’ve missed by not knowing him, but the more I learn about the man whose name I carry, the more I realize that the way he displayed his faith illustrated a distinctive combination of spiritual discipline and active witnessing in everyday life.

Donald Edward Bandy was born in 1928 and worked for Canada Immigration for over twenty-five years. As a result, he was constantly relocating with his wife Shirley and their three kids during my father’s growing up years. After living in many cities around the country from Nelson, BC to Ottawa, ON, he finally settled in Niagara Falls for thirty years before his death.

In 1970, a pastor who was planting a church down the street stopped by the Bandy household (in Toronto at the time) to introduce himself. He planted the seed of the Gospel in my grandparents’ hearts, and after a few visits yielded a harvest. The Good News took hold of Don and his wife and they lived the rest of their days in prayerful faithfulness to the Lord.

Convinced of the truth of the Gospel, Don and Shirley worked hard to love Christ and spread His Word – leading their children to the Lord and becoming involved with the Church. Don joined his local Gideons chapter and devotedly deposited Bibles throughout his community. He worked tirelessly planning the annual Mayor’s Prayer Breakfast, leading children’s Sunday school, organizing in Bible studies, and serving as a deacon in his church in Niagara Falls. After many years of work in the Lord’s service, Don died on January 16th, 2002, of cancer, surrounded by his loving family.

My dad likes to characterize his parents as “clay pots” as referenced in 2 Corinthians Chapter 4.

You see, Don was just a regular guy. He loved golfing and bargain hunting (The two often went hand-in-hand as he would stop to pull golf balls out of the water hazards around his favorite links. He would then sell them back to the pro shop in exchange for the next year’s membership). An enthusiastic coffee drinker, he would always make sure his waitress brought him a steaming cup as soon as he sat down (something I’ve managed to pick up from him). He, like many parents, had a deep love for his family, and tried to serve his community to the best of his abilities.

What, then, did Don accomplish? His name will never be recorded in a book of the most eloquent expositors of Scripture. He never published any commentaries, devotionals, or prayer books; he never recorded any worship songs. He wasn’t a local hero or icon that used a position of authority to convert the masses. He never pastored a church, and only spent about half of his life as a believer. 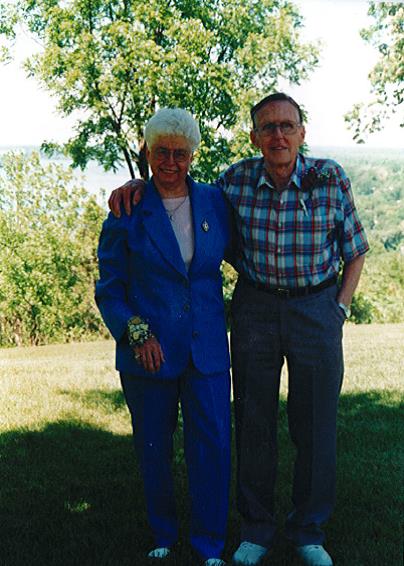 Instead, Don exemplified how faith infuses average experiences with spiritual significance through the work of a God who is present in the everyday. He strived to align himself with God’s will in such a way that he could magnify the “light of the knowledge of the glory of God.” He had a gift for peeling back the outer layers of mundane activities and finding little nuggets of truth within each of them, and then using them to point back to the source of his salvation.

This is what made Donald Bandy an exemplary witness for the Lord – he could cleverly reveal beautiful treasure, hidden within the clay pot of the usual. He found a way to be faithful and witness to others within the busyness of everyday life. The most tangible way I experienced this was through Grandpa’s dedication to a life of prayer.

Growing up in New Brunswick, I only visited my grandfather a few times on family trips to Ontario. During those special visits, we never sat down to a McDonald’s breakfast, or even a tea party of crackers and juice, without Grandpa doffing his hat and leading us in a prayer of thanks – even for a bit of Kool-Aid served out of a toy cup. Our family never left his house for the long drive back to Moncton without a genuine prayer for “journey mercies” as we went on our way.

Why was Grandpa so quick to prayer? Why did he pray so frequently? I believe it was because he understood that our God is one who is faithful to keep families safe on the drive home; that a tea party with grandchildren is a blessing to give thanks for; and that a planted hotel room Bible could become the seed of faith for a searching soul. Don knew that daily prayer builds the muscle of trust in the Lord, and he exercised that muscle regularly.

I wish now that I would have been able to attend a prayer breakfast or Bible study with my grandpa, and see this display of faith with my own eyes. Despite having been robbed of these opportunities, the true impact of my grandfather’s legacy is solace for the experiences I lack. Grandpa Bandy had three kids, all of who remain engaged in their local faith communities. They, in turn, married other believers, and raised their own kids in righteous instruction. Long after his death, the foundations he laid continue to have a positive inter-generational impact on me and the other grandchildren he never saw grow up. Future generations of Bandys will continue to be affected by his decision to follow the Lord and this number would only be multiplied if all of the people he mentored in small groups, prayed with at Bible studies, or taught in Sunday school could somehow be accounted for.

As I seek to replicate the example that my grandfather has laid down before me, I am inspired by his ability to pull back the curtain to reveal how faith transforms the ordinary into the extraordinary. While I know that I am often overtaken by the mundane, discouraged by “the grind” of the work week, or confounded by social drama in family and friend groups, I can only do what my grandpa did, drawing strength on the same source of truth and assurance: “Forgetting what is behind and straining towards what is ahead, I press on toward the goal to win the prize for which God has called me heavenward…” (Philippians 3:13-14)