My great-grandfather, Gerald Baden Griffiths, was born in Wales on September 25, 1922. He was one of six children in his family. Gerald had a strong passion for reading when he was young, and he still does to this day. Gerald preached his first sermon when he was only 16 years old. He preached in his home country in Welsh. 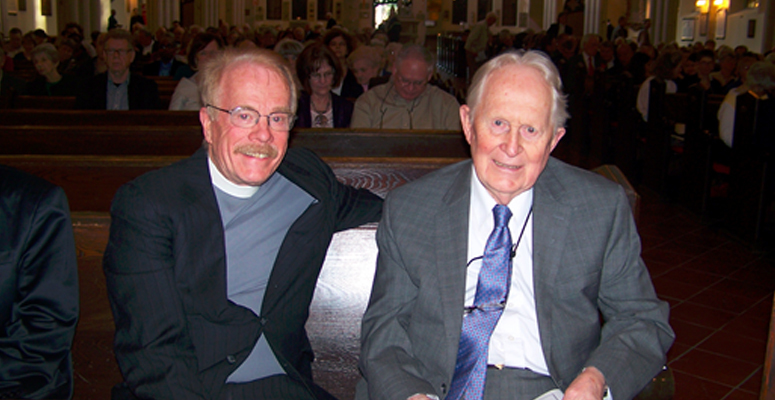 In 1969, Gerald moved to Canada with his wife, Kitty-Anne Griffiths. He moved to Canada because he was called to be a pastor at Calvary Church in Toronto where he preached for more than 30 years. Gerald and Kitty traveled around the world to spread the word of God. They traveled together as guests of the Israeli government to see where all of the Bible stories took place.

Gerald preached in many countries including England, South Africa, Wales, Scotland, and Canada and has brought many people to Christ. Kitty-Anne Griffiths started the Mrs. G Bible Story Ministries. He enjoyed doing the editing and researching that was needed for the stories to happen. The Mrs. G stories are now in many different languages, on CDs and books, and they have been sent to countries all around the world to tell people about God.

Gerald became a Canadian citizen at the age of 94. His many relatives, including his 30 great-grand children would describe him as a wise, thoughtful, and kind man who has had an amazing influence on their faith.

Gerald started preaching when he was 16 and he still does at the age of 95, a total of 80 years. His parents did not go to church but he loved church so much that he went on his own to the nearby Episcopal church and sang in the choir.

When Gerald was 11 years old, his father became a Christian and attended a Baptist church. Gerald went with him. The pastor there loved children. He asked Gerald to read the Scriptures in a Sunday morning service. Then the pastor asked him to memorize a story and tell it in an interesting way in the Sunday morning service. For that he was coached by an elocutionist on two Saturdays.

The pastor then started him in public speaking. Another man in the church helped him. He believed Gerald was going to be a preacher and pastor and he prayed earnestly that he would be converted. When Gerald 14, the elocutionist prayed with him and he received the Lord Jesus as his personal Saviour and Lord. When Gerald was 16, he preached a trial sermon at a midweek service in his home church, and the congregation commended him to his denomination as one called to preach the Word of God and pastor a church. This enabled him to start his six-year theological course at the age of 18.

Being a preacher was Gerald’s first choice as a career and he has enjoyed it very much. He says, “If I had my life to live again, I would love to do the same, only better.”

One of the ways that Gerald loves to spread the word of God now that he isn’t preaching as often is through the Mrs. G Bible Story Ministries. He now serves as president of Bible Stories Alive on A Visit with Mrs. G Ministries. This is a weekly Bible story radio program that has been broadcast worldwide since 1973. The stories were written and told by Mrs. G, his wife, who is now in Heaven. His chief duty now is to edit her 500 Bible stories for translation and production in eBook and audiobook format in Mandarin for China, in Farsi for Iran, in Arabic for the Middle East, in Swahili for East Africa, and in Spanish. These stories have turned many to Christ all over the world.

Gerald has preached in many places including churches, in public halls, in universities, in youth camps, in hospitals, in prisons, and by radio and in print, and in other languages in Africa and South America by translation. He was a pastor for 50 years, beginning in Cardiff, Wales; then in London, England; in Edinburgh, Scotland; in Johannesburg, South Africa, and in Toronto. In all these places, God has transformed the lives of children and young people and adults.

Gerald Griffiths has had an impact on many people in Canada, and all around the world. He has dedicated his life to serving the Lord and to teaching people the miracles that the Lord has done. Gerald Griffiths is a man that I believe has had a tremendous effect on many people’s faith by reason of his trust in the Lord and how he strives to get to know Him better on a daily basis.