Come and See Me 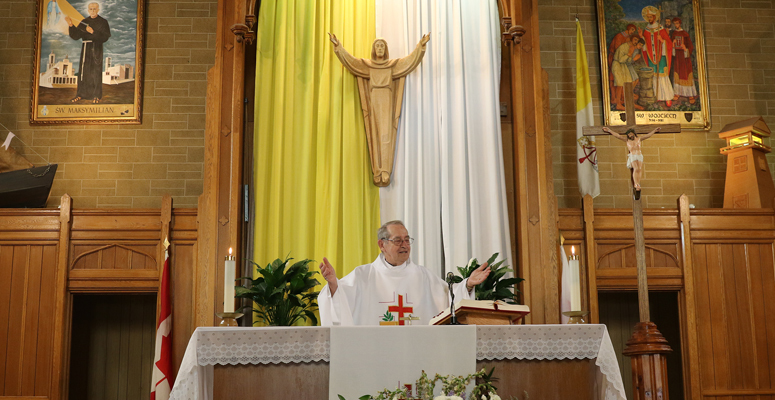 Growing up in Montreal’s Notre-Dame-de-Grace district, Kennedy lived a classic mid-century Catholic life of family, faith and formation. Home was steeped in the warm comfort of a serious Christianity that remained wide open to enjoying sports, fun and friendship.

Walking to Loyola High School, he often mad early morning stops at St. Monica’s Church for Mass or just to pray quietly. It’s also where he met his pals who were on their way to school, too. Balance, Father Kennedy calls it now: a wonderful equilibrium of adolescent living. And then along came a young Jesuit, first to upset him, then to tip the scales definitively to priestly vocation.

Kennedy is now retired, though he still says Mass and remains active at two parishes in the Montreal suburbs of Lachine and Dorval. At the time, though he was just nearing graduation, thinking seriously about life after Loyola, when one of the school’s Jesuit teachers asked him if he would ever consider the priesthood.

“Not only did I tell him ‘no,’ I told him to never ask me that again. I said that if he did, I’d leave the school. I was so upset with him. I wanted to be a doctor. I did not want to be asked about becoming a priest,” Father Kennedy says.

Nothing more was said. Which didn’t mean the Jesuit had taken ‘no’ for an answer. Some months later, young Kennedy was asked to help train two boys as altar servers. Both lads were legally blind.

“I guess it would be like being in the last stages of glaucoma where you see, but in a limited, cloudy, darkened way. I took them to the chapel and I said, ‘All right, I’ll help you learn what to do. You pretend (to serve), and I’ll pretend to be the priest.’ I was standing there, and the tears started pouring down my face. I realized I didn’t want to pretend to be a priest. I wanted to be a priest.

“I got this cold sweat, and I realized at that moment, this is where I’m meant to be. It was as if the kids weren’t even present. It was God saying ‘Come and see.’ It was very profound. And very real.”

He became determined to enter seminary. Yet he was still so confused by the eye-opening experience that he wasn’t even sure how to tell his parents they had a future priest under their roof. A raccoon knocking a over a garbage pail in the middle of the night, and the ensuing racket of the lid bouncing down the quintessential Montreal spiral metal staircase, provided the opening he needed. Both he and his mother got up to investigate the noise, and met in the kitchen.

“I remember saying to mom ‘you going to have a cup of tea? There’s something I want to tell you. I am thinking of becoming a priest.’ Mom didn’t know what the hang to say.

“When dad heard, he ran out to Loyola and said to one of the Jesuits ‘my son wants to become a priest; what do I do?’ The Jesuit said, ‘Nothing. You just keeping praying, let him find his way, and be there to support him.’ It’s the best advice anybody could ever give a dad. I keep that prayer going,”

There was one other vital bit of news breaking to be done. Kennedy had a girlfriend. It was a struggle to come to terms with breaking the relationship off. It was almost as hard finding the right words to tell her why. As it turned out, she was dealing with the exact same difficulty. She had decided to become a nun.

Seminary life, Kennedy acknowledges, was “rugged,” which he pronounces as if it were a perfect euphemism for brutal. He was not unaccustomed to emotional challenge. He lost two sisters in childhood; one aged two from meningitis, one a newborn. His mother was painfully stricken with – ultimately dying from - what was eventually diagnosed as kidney disease. But even having been educated by the Jesuits at Loyola, the intellectual demands of the seminary became oppressive. There was serious discussion of him leaving. He stayed.

“A lot of it was my own problem with fighting the system. With all of that, I struggled and remained even more resolved to fight as much as I could to get ordained, and it was the most wonderful thing that ever happened,” Father Kennedy says now with the perspective of more than half a century.

“I really feel all the struggles I went through fortified my response to God, and made the call of God even more solid. The call of God is real, and to be a priest, to be a Christian, is to pick up the Cross and follow Christ,” he adds.

The demands of the Cross did not diminish an iota after ordination. He emerged from seminary into the full-on turmoil of the post-Vatican II Catholic Church. What was supposed to be an “opening of the windows of the Church to let in fresh air” felt more like a full-on hurricane. Seasoned priests with 25 years experience were flummoxed by the rapidity of change. Kennedy, a neophyte, had to help some of them re-learn how to get through Mass.

The winds of change took many away. They almost got Kennedy. About 12 years into his ministry, he suffered a severe nervous breakdown. A counselor at the time told him that a breakdown could be the end, or it could be the beginning of an even more intense life of living and loving.

“I thought ‘holy smokes, this crazy guy, he’s got something there. I need to hear that. The whole period that seemed so disastrous was the birth or me into another 40 years of priesthood.”

Father Kennedy sees the clear parallel between his own history and the breakdown of the Church in recent decades. But he sees, too, in the parishes he serves, and indeed all around him, people hungry for faith. He sees a crying need for the Church to welcome them with eyes – and heart – wide open.

“When Christ was walking along in the early part of his public ministry, a couple of fishermen said to him, ‘Where do you live?’ He just responded, ‘Come and see.’ Come and see and discover who I am. Maybe you’ll want to stay with Me, and grow with Me, and become like Me.”