My Journey with John Paul II 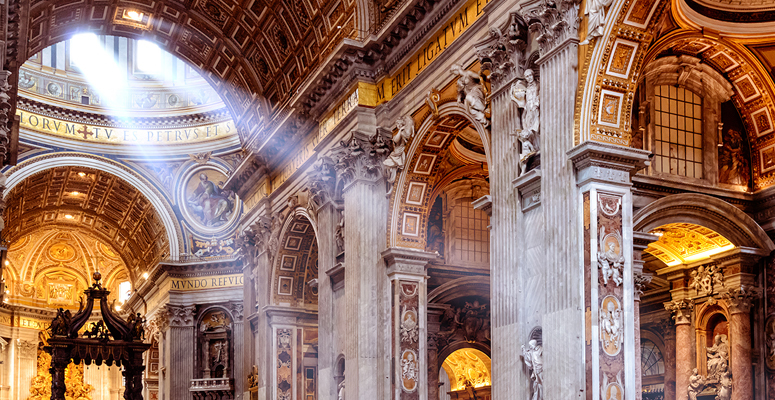 For me, faith radically changed through a personal encounter with a person whom I have never met.

As a child and adolescent, Catholicism was an integral and even assumed component of my existence. Perhaps it would be more accurate to say that it was woven into the fibres of my weekly (rather than daily) life; I was a Catholic at all times, technically speaking, but my participation in this universal church was, for the most part, limited to that single hour of Sunday mass.

I did have a genuine belief, and I did pray (and in praying, aspire to pray more). However, a certain personal dimension was missing - the sort of lack you don’t notice unless you feel a spark of what could otherwise fill in this absence - the potential for presence.

I was 20 years old when my 81-year-old grandmother asked me to accompany her on a pilgrimage organized through her church to Italy, Austria, Czech Republic and Poland. The opportunity filled me at once with excitement - to visit all of these amazing places (I had never been outside of North America before) in a faith-infused way and to do so with my grandmother, with whom I have a close relationship, was a prospect that rang out with superlatives like “unforgettable” and the “trip-of-a-lifetime.” But the purpose of the pilgrimage was not simply to travel to a list of holy places scattered throughout Europe. It was unified by a particular theme, or rather, by a particular person. In fact, the pilgrimage had a title: “Following in the Footsteps of John Paul II.”

The trip was scheduled for only a month or so after the canonization of this Pope of the Third Millennium, and I set about preparing (as one ought to do when embarking shortly on a “trip-of-a-lifetime”) by reading George Weigel’s brilliant biography, “A Witness to Hope.” This was my first time meeting John Paul II, otherwise known as Karol Wojtyla (before 1978), or as “Wujek” by many of his friends (meaning “uncle” in Polish). Despite growing up in the faith, before this I had known little to nothing about him. But even in those beginning pages (replete with quotations from the pope himself), it became clear that I was not simply learning facts about a historical period and a historical figure therein. As I read on, I did not only know about John Paul II; I felt like I knew him.

This book led me next to discover John Paul II’s “Theology of the Body,” and the ideas contained within not only changed my life, but continue to shape its future course. At the centre of it all is a vision of the human person as inherently valuable and worthy of love, as deserving of dignity just by the virtue of being, as a good that is whole (body, mind and soul) and not segmented into separate parts. The human person - the acting, thinking, breathing, being person - is a subject, and never an object of love. When I reflect on these truths (which I very often do), John Paul’s words from “Love and Responsibility” always fill my mind:

“A human being is a good toward whom the only proper and adequate attitude is love.”

When I say that these ideas changed my life, I am being entirely serious. This vision of the human person underpins everything, precisely because it conceives of the person as someone to be loved and treated in accordance with the fullness of their nature. I began to realize how often my behaviour to others was fragmented, how I was depriving those around me of the fullness of my presence (distracted by various things), rather than responding to them with patience, sensitivity and love, recognizing in them the beauty and complexity of a unique expression of humanity. This reduces the person - the “other” - to an object.

I also began to realize that I treated myself this way as well. I saw myself as a series of divided parts, all measured against external standards, of whether I could achieve enough to become deserving of love. If I thought myself smart, then this only led to the fear that without this intelligence, I would be devoid of the thing which makes my self myself. But the intrinsic dignity of the human person, while in no way meaning that the person does not sin, or that there is no right or wrong - does meant that a life always holds an inextricable and inexplicable value, regardless of whether the person in question is vulnerable, dependent upon others, or has failed in some way.

John Paul II didn’t teach me that. I see this vision of the person as a fruit of my faith, since human dignity stems from being created in God’s image. However, John Paul II is and has been to me, as so many saints are and have been to people of faith, a model and a guide, showing to me through his life and his work how I too might enter more deeply into the mystery of the human person, how I too might grow closer to God by loving and respecting His creatures in their dignity and truth.

Many people who met John Paul II during his lifetime said that when he spoke to them, even for only a few moments, they felt as if they were the only person in the world who existed for him just then. I find this particularly moving. Here he was, a man constantly travelling and discussing important issues with important people, a man who was sought after and who sustained for himself an impressively busy schedule; yet no person was too small for his notice. Each person was a good to be treated with love, and he looked at him or her in a singular way.

I believe that this is an incomplete but beautiful reflection of the way in which God loves us, calling us individually by name. When I travelled to the many grand places on the pilgrimage itinerary, I was, as expected, in awe, and I felt a great joy to visit such beautiful sites, and to follow these paths that John Paul II had tread, gazing across the columns (decorated by saints) in the square of St. Peter’s in Rome; ascending the spiralling hill to Wawel Cathedral in Poland, where John Paul II was addressed as Archbishop Wojtyla. But I also had a deep sensibility that there was more to life than this - or rather, less - and that this “less” was equally of value, that God speaks in the most ordinary of encounters if we are present enough to the “other” to hear Him. At the most essential level, God calls us simply to “be.”

My Catholic faith has grown because this “personalism” has helped me to love more deeply the person of Jesus and to feel His love for me in a personal way. This leads in turn to learning to love myself as God’s beloved creation, and from there flowers into a love which does not need to “protect its own,” but can share of itself with others, loving people not for what they have done but for who they are.

Jenny Sullivan is a Catholic novelist and writer who is undertaking a Master’s degree in English.