Churchgoers at Calgary’s Hillhurst United Church experienced a different kind of service recently when they participated in the Blanket Exercise — a teaching tool that shares the historic and contemporary relationship between Indigenous and non-Indigenous peoples in Canada. 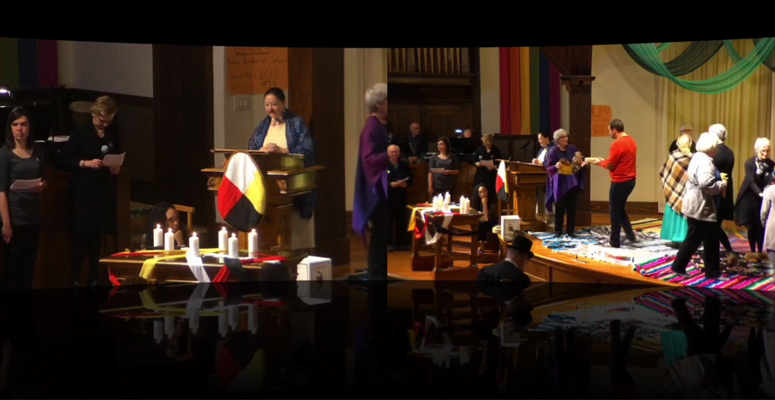 Developed by KAIROS in response to the report of the Royal Commission on Aboriginal Peoples, the Blanket Exercise is a participatory, visual and experiential workshop that uses blankets to represent the land. The original Blanket Exercise is an hour and a half participatory workshop, covering 500 years of history. KAIROS developed a 20-minute version suitable for use in worship services.

Rev. Dr. Danielle A. James says the Hillhurst congregation is amid a worship series called “How Then Shall We Live?” with various guests engaging in possible answers to that question. One answer to this question is to live as treaty people in right relations, she says.

Cheryle Chagnon-Greyeyes, a Status Indian Cree and member of Muskeg Lake Cree Nation, Saskatchewan, narrated the Blanket Exercise during the service. The exercise takes people back to the encounter of the Indigenous people with European settlers. Blankets representing the land get smaller, and people who represent Indigenous citizens experience historic events through the narrative.

Members of the Right Relations Circle were participants, taking off their shoes to walk on the sacred blankets representing the land. About 400 people attended the two services that morning.

Danielle describes the atmosphere during the Blanket Exercise as “heart-focused,” with a sacred silence at the end. Attendees held hands in a circle, and sang the United Church song Deep In Our Hearts before Cheryle shared a final blessing – “a holy sign of spirituality and mutuality,” Danielle says.

The exercise touches on various issues, including equity, racism, and the challenge of practicing unity as much as diversity.

“We are treaty peoples and with that comes a responsibly to keep engaging our reality as Indigenous and non-Indigenous people,” Danielle says.

The decision to hold the Blanket Exercise as part of a Sunday service, instead of during another time in the week, demonstrates how important reconciliation work is amongst the church’s community.

“I think we were courageous as a community in doing this in our worship service,” Danielle says.

“Even today in Canada it still is risky to look at our Canadian story, our Canadian heritage with a rigorous honesty and to look at the multifaceted ways that we have come to be the nation that we are,” she says.

An immigrant to Canada herself, Danielle says she has considered what Canada’s Indigenous history means to her – and through experiences like the Blanket Exercise she has absorbed it in a deep way.

“To be Canadian is to be treaty people, and I think that was one of the key takeaways for us,” she says.

To view a video of the service, click here.