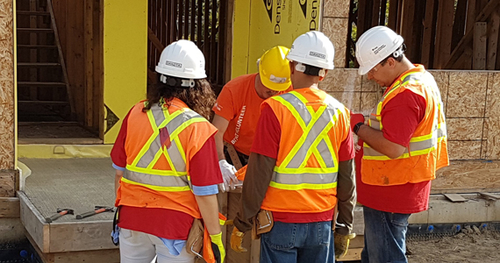 TORONTO – Fifteen families in the Greater Toronto Area will have safe, decent, and affordable housing, thanks in part to the Faith 150 Build. More than 30 leaders from a variety of religious backgrounds gathered at the Habitat for Humanity GTA east-end Toronto build-site at 140 Pinery Rd. today for a special day of volunteering for the construction. Faith in Canada 150 – a program of think tank Cardus – organized the effort in partnership with Habitat for Humanity GTA.

“Canada has a rich faith heritage that we’re celebrating in this 150th anniversary year,” says Ray Pennings, executive vice president of Cardus. “Through Faith in Canada 150 we’ve been able to build friendships across religious lines, and now we’re seeing a tangible expression of that in building the common good through the provision of housing.”

Toronto’s faith communities won’t stop at one day of building by their leaders, however. Members of various faith communities will gather at the same site on October 25th to continue volunteering on the construction of the units. And on October 26th, a Women of Faith build is planned at 140 Pinery Rd. By 2019, the site’s stacked townhouses will become home to 50 working, low-income families.

“The spirit of multiple peoples with differing beliefs and traditions coming together in peace, friendship and shared responsibility sets a wonderful backdrop for Faith 150 builds,” says Ene Underwood, CEO of Habitat for Humanity GTA. “Beyond the physical building of Habitat homes for families that will occur over these three days, this time together will enable us to build new relationships and deeper understanding around the fundamental right of everyone - to a safe, decent place to call home.”

About Habitat for Humanity GTA

Habitat for Humanity Greater Toronto Area (GTA) is a non-profit housing organization that brings communities together to help working, low-income families build strength, stability and independence through affordable homeownership. With the support of donors and volunteers, Habitat GTA builds homes alongside partner families in Toronto Brampton, Caledon and York Region. Since 1988, Habitat GTA has built more than homes for more than 330 families, including over 1,000 children.