The heart of Father Lacombe

Cruising down Highway 1 on a day trip into Calgary with my wife and four children, I excitedly announced my planned detour: “We’re going on a quick pilgrimage to find the heart of Father Albert Lacombe!” 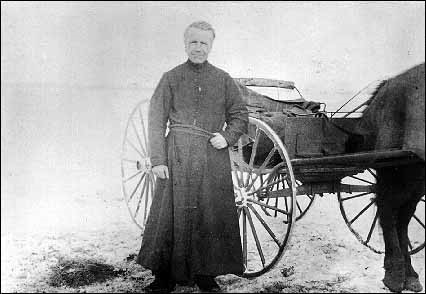 Most Albertans – whether they realize it or not – have heard of Fr. Lacombe.  A quick Internet search reveals that this saintly missionary priest has had a neighbourhood, nursing home, hotel, park, school, Catholic men’s guild and even a town named after him.

The kids handled the news of the excursion with a miserable howl in the back seat and my wife asked, “Lacombe’s heart?”

Yes, his heart.  At the time of his death on December 11, 1916, his body was laid to rest at a cemetery in St. Albert, one of his early missions, behind the Father Lacombe Chapel Historic Site.  But it is his heart that I’d been inquiring about for months.  Following a uniquely Catholic tradition of obtaining and sharing holy relics, his mourners removed his heart and buried it at the school he established in Midnapore, a hamlet near Fort Calgary.  They had wanted his heart to remain with the Blackfoot children whom he loved so dearly.  After all, the Blackfoot people called him Arsous-Kitsi-Parti -- “The man with a good heart”.  However, since the Midnapore School is now gone, I wondered what had happened to Father Lacombe’s heart? Fortunately a priest friend informed me, “The heart is buried near St. Mary’s University – in the cemetery.”

So we were off to visit the cemetery.  On our way, I tried to sooth my children with stories of Lacombe’s life of heroic virtue.

In the mid-19th century, before the railway, Alberta was primarily home to two distinct First Nations: the Cree, who lived along the North Saskatchewan River; and the Blackfoot Confederacy, who lived along the South.  It was into this foreign land that a young priest from Quebec was called by God.  In 1848, he recorded in his journal, “Sunday night, when the cathedral was filled, [a priest] went up into the pulpit and painted in an eloquent way the life and work of his [prairie] missions… I was struck to the heart.  An interior voice called to me – ‘Whom shall I send?’ and I said in reply, ‘Behold, I am here; send me.’”

Only a year later, travelling from the St. Lawrence River, across the thick forests of Ontario, through the prairies (narrowly missing an attack by the Sioux) and arriving near the Rockies, the barely twenty-five year old Lacombe arrived at Fort Edmonton.  At the time of Lacombe’s arrival, Edmonton was a Hudson’s Bay Trading Post with a population of about 130 people.  For the next sixty-five years, Lacombe would serve the people of Alberta.  With the guidance of the Holy Spirit, he established the missions of St. Albert and St. Paul, taught the Metis, likely constructed the province’s first bridge, and while living with the Cree, published a Cree-French dictionary.

Tragically, the 1870s saw a small pox epidemic spread across Alberta like a prairie fire.  Into the thick of it Lacombe hurried, spending months nursing his beloved Cree people.  Undaunted by the difficult situation, Lacombe describes the vile disease, “The patient is at first very feverish, the skin becomes red and covered with pimples …then the flesh begins to decompose and falls off in fragments.  Worms swim in the parts most affected.”  Yet, while so many fled in horror, Lacombe stayed and prayed; after all, he had bodies to nurse and souls to save.

After nearly two decades serving and evangelizing the Metis and Cree people of the north, Lacombe prayerfully decided it was time to venture south into Blackfoot territory.  From the Rocky Mountains across the grasslands of southern Alberta, the Blackfoot Confederacy reigned supreme.  For at least two hundred years these warriors dominated this territory against the frequent encroachment of the Cree, Metis and Sioux.  It was with these mighty warriors that Father Lacombe was next called to serve.

Within weeks, he found a Blackfoot tribe who welcomed him.  Shortly after midnight one cold December evening, near present-day Red Deer, Lacombe was fitfully asleep inside a Blackfoot chief’s teepee.  Awoken by the distinct whistling sound of bullets flying close by, he found himself in the middle of a battle.  His northern friends, the Cree, were attacking his new acquaintances.  He was in the middle of a blood feud!  Calmly, he followed the chief and his frantic family from the lodge as it collapsed behind them.  Lacombe writes, “I tied my shoes …kissed my cross, and gladly made a promise to God to sacrifice my life.”  Later, he vividly described the pandemonium: rapid volleys of gunfire, war cries, wailing agony of the injured and continuous barking of dogs.  The dark winter night was lit only by the “sinister flash of burning gunpowder”.  In the midst of all the chaos, Lacombe found a young woman dying of a bullet in her skull and, with her consent, he baptised her.  There in the snow, she died a Christian.  Over the next five hours of darkness, Lacombe assisted the Blackfoot by nursing the injured and administering sacraments to the dying.

Finally, the morning sun crept over the flat horizon revealing the once white snow dyed red with blood.  Hoping to be seen by his friends the Cree in the dawn light, Lacombe climbed to higher ground and waved his red-cross flag.  The pervading din and darkness foiled his plan.  Several bullets whizzed close by, before one unlucky shot ricocheted off a rock, glanced off his shoulder and miraculously just grazed his head.  Still holding his crucifix, Lacombe collapsed into the snow.  Two Blackfoot men dragged him back to their teepee.  At that moment, the Cree heard a shout from the Blackfoot’s camp, “Stop, you dogs!  You have shot your Blackrobe!”  Immediately, the Cree stopped shooting.  The battle was over.  Later, the Blackfoot estimated that over a thousand Cree warriors left the battle that winter morning after fearing they’d killed their beloved priest.  As for Father Lacombe, he was on his feet helping the Blackfoot within minutes; and within days he was galloping home to Fort Edmonton for Christmas.  Such athletes for Christ are indomitable in spirit.

Back in my van, my family and I approached St. Mary’s University.  The mood in the van had changed from melancholy to merriment; they were now excited for our adventure.

The cemetery for which we searched is behind the Father Lacombe Care Centre.  If you’d like to retrace our steps, then I suggest you pay close attention, for this is how to find the heart of Fr. Lacombe.  First, drive past the Lacombe Centre and at the sign that reads: Private Property, do enter.  Then trespass at the No Trespassing sign.  Finally, park in the lot marked Visitor Parking Only.  Once out of the vehicle, you will encounter a shrine of great beauty; immediately in front you is an exquisite replica of the grotto of Our Lady of Lourdes.  Spend a moment there with Our Lady.  Then, go to your left to an ancient wrought-iron gate overgrown with shrubs.  It may appear as if it has not budged in a generation, but I assure you we wiggled it open.

Inside reverent silence is required as you are standing on holy ground; it is here that the good heart of Father Albert Lacombe rests alongside numerous students of his Midnapore School, many of whom were laid to rest during the last major tuberculosis outbreak.  My family and I knelt and prayed.  Truly the Arsous-Kitsi-Parti’s heart is where it belongs, with the people he loved most.