Deloria Bighorn, Chair of the Canadian National Spiritual Assembly, the national governing body of the Baha’i Community of Canada, accompanied by her daughter Jelana, presented the Baha’i submission to Canada’s Truth and Reconciliation Commission on Friday 20 September, 2013 in Vancouver. 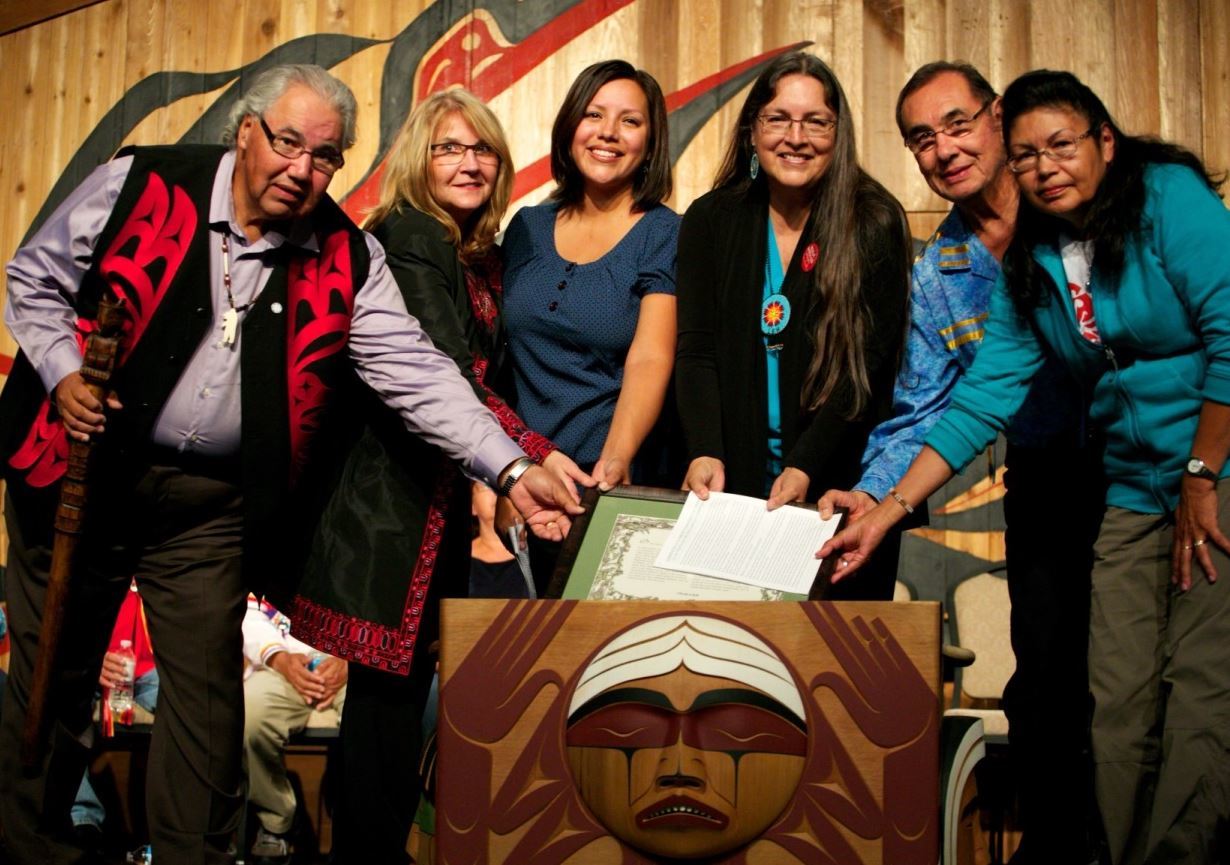 In the words of the submission, “The establishment of the Commission represents another important step in the process of cultural reconciliation in Canada. By bringing to light the suffering and injustice inflicted by the Residential School system, the Truth and Reconciliation Commission will help to right those wrongs experienced by Aboriginal Peoples in Canada. It is essential for us to understand the history and legacy of the Residential School system so that we can heal its deep wounds on our country and its peoples, and build new relationships based on justice and the fundamental oneness of humanity.”

The formal presentation of the submission followed a panel organized by the Canadian Baha’i Community and Reconciliation Canada the previous week, during which 250 people listened to Chief Doug White, Chief Dr. Robert Joseph, and Dr. Paulette Regan from the Commission discuss the challenge of reconciliation.

A number of members of the Baha’i community volunteered at or attended earlier national events in Winnipeg, Halifax, Saskatoon, and Montreal, listening to the heartbreaking stories of survivors of the residential schools, an ill-conceived program that wrought terrible destruction on the lives and culture of the Canadian indigenous population.

Several thousand people, including university students from the University of British Columbia and Simon Fraser University, both of which had cancelled classes on the first day of the Commission to allow students to attend, were present at this most recent of the six national events of the Truth and Reconciliation Commission.

The Vancouver national event came to a close on Saturday 21, in September 2013 and a huge march of solidarity and unity, healing and reconciliation, took place on Sunday. A few dozen members of the Baha’i community of Greater Vancouver, most of them young people, joined the march with respect, love and enthusiasm.

Commissioner and Chair Murray Sinclair quoted his colleague, fellow commissioner Chief Wilton Littlechild, who said that the Commission represented a process “from surviving to thriving.” He commented that “we need to stop walking into our future backward” and yet also listen carefully to the stories of injustice and evil so that healing and genuine reconciliation can take place, not through forgetting, but by moving forward into a shared future.

The Commission in Vancouver included a special session, sponsored by the Inspirit Foundation in partnership with the Commission, in which four youth representing their people —a Jewish youth who talked about the Holocaust, a Japanese youth who spoke of the hurt resulting from the Internment Camps for Japanese Canadians, a Chinese youth who recalled the Head Tax imposed on Chinese Canadians, and an Aboriginal youth — exchanged stories and lessons from their parents and grandparents about survival and resilience, overcoming adversity, and the processes of reconciliation which their respective communities had experienced.

Kim, the Aboriginal representative, noted that “reconciliation is a verb,” and that we have to be active and engage each other, and not be silent about our mutual relationship and presence in this country. She summed up her thoughts by asking, “What can I do now to serve my community?” That is the attitude and process by which we move ahead and manage to deal with suffering and healing. “We must go back to our communities and help each other out… and my responsibility as a young adult is to help the person even younger than me.” Service to the community, she felt, with the other three young people nodding in agreement, was the surest path to overcoming injustice.

Rebuilding social relationships is crucial to the process of reconciliation, according to the submission. “We understand the current, troubled period in human life on this planet, during which Aboriginal peoples have been disproportionally harmed by the destructive forces of history, to be one in which there are also growing constructive forces. These forces are bringing long-separated peoples together into new relationships, where dynamics of prejudice and domination are replaced by the powers of cooperation, reciprocity and genuine love and harmony among diverse peoples. We must do our part to promote those constructive forces while never being so naïve as to ignore the destructive forces that have brought such sorrow and pain to so many.

“The process of reconciliation will help us to re-conceptualize and transform the basic relationships that sustain society, to create an environment that promotes individual and collective well-being.”

Click here to read the Baha'i Community of Canada's submission to the Truth and Reconciliation Commission.

This article was originally published by the Baha'i Community of Canada.