Changing the Climate for Faith and Science

Katharine Hayhoe, one of TIME Magazine’s 100 most influential people in 2014, delivered three lectures relating to her field, climate science, three years ago this month, at Trinity Western University, near Vancouver, in Langley BC. 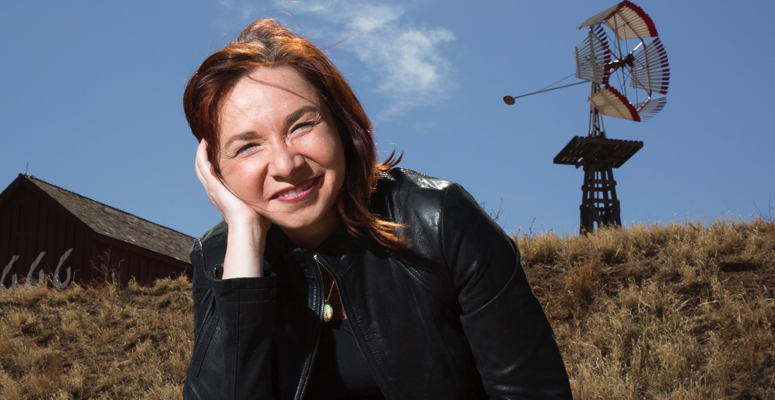 Hayhoe, a Canadian, is a climate science professor at Texas Tech University. Her husband, Andrew Farley, is an evangelical pastor in Lubbock, where TTU is located, and a teacher at the school. The congregation he pastors goes by the name of Church Without Religion. Shortly before our interview, Farley and Hayhoe had co-authored A Climate for Change: Global Warming Facts for Faith-based Decisions.

On her website, Hayhoe said, at the time: “I don’t accept global warming on faith: I crunch the data, I analyze the models, I help engineers and city managers and ecologists quantify the impacts. The data tells us the planet is warming; the science is clear that humans are responsible; the impacts we’re seeing today are already serious; and our future is in our hands. As John Holdren once said, ‘We basically have three choices: mitigation, adaptation and suffering.’ We’re going to do some of each. The question is what the mix is going to be. The more mitigation we do, the less adaptation will be required, and the less suffering there will be.”

I interviewed Hayhoe on September 30, 2014, by phone, while she was sitting out a plane change in Oklahoma City.

During our interview, Hayhoe talked about the influence of her family in Toronto, where she grew up, in helping her to appreciate both science and faith. The Hayhoe family was and remains influential among evangelical Christians in Ontario.

That influence comes through the Plymouth Brethren movement in which she was raised, as well as through such organizations as Tyndale University College and Seminary, the Canadian Council of Christian Charities, Inter-Varsity Christian Fellowship and World Vision. Her father, Doug Hayhoe, is a professor in the teacher education program at Tyndale. Other Hayhoe family members have brought their influences to bear in legal, business, civic affairs, international and educational fields.

In the Plymouth Brethren movement “everybody was equipped to read and study the Bible [rather than seeing] the pastor as the interpreter,” Hayhoe told me, adding that she learned to take the same approach to “God’s second book – science.”

Inter-Varsity continued that influence – particularly through its emphasis on inductive Bible study – when she went to the University of Illinois, where she earned her masters and doctorate – and where she met Farley.

Having been influenced by many of her family forebears to appreciate nature and the need for people to care for it, Hayhoe entered the climate change field, recognizing it carries “a lot of baggage.”

Much of that baggage revolves around political and religious polarization on the issue, particularly in some parts of the United States. In a PBS interview with Bill Moyers, she spoke about the emphasis many pastors in drought-ridden West Texas have, simply, on “praying for rain.” They do so, she suggested, without recognizing the role human-related climate change might have on their predicament.

During the Bill Moyers interview she said: “Caring about climate is entirely consistent with who we are as Christians. But over the last several decades . . . we have increasingly begun to confound our politics with our faith. To the point where instead of our faith dictating our attitudes on political and social issues, we are instead allowing our political party to dictate our attitude on issues that are clearly consistent with who we are. . . . Climate change is a casualty of much larger societal issues. If we can get past the issue of rhetoric and politics, and actually start talking about what’s in our hearts, I have seen amazing things happen in terms of moving forward to look at solutions that are consistent with the values that we have.”

Hayhoe has built her influence in the faith-science discussion, in part, by declining to participate in combative media debates that pit pro- and anti-climate changers with each other. She is mildly but clearly critical of people who view climate science sceptically from a conservative perspective and choose to stand apart from the discussion, throwing stones, so to speak, at those who differ. Conservatives, in their own right have valid perspectives, she said, adding that they need to bring those perspectives to the discussion table, rather than lobbing them from beyond the rim.

In fact, she points to a group with which she readily identifies, which has a growing presence in Canada, Citizen’s Climate Lobby. The website for that group contains a strategic guide which summarizes the approach Hayhoe tries to follow in acquainting people who might otherwise be ‘enemies’ with facts and information about climate science.

In our interview, Hayhoe made three points for consideration.

In the months following our interview, Hayhoe lectured at several other Canadian colleges and universities, many of them Christian – including Regent College at University of British Columbia.

And two accounts of her work, one published two years ago in Maclean’s Magazine and the other, this past summer, in Journal of Geoscience Education, update what has been happening since 2014.

Authored by Charlie Gillis, the November 9, 2015 Maclean’s piece was entitled “One Canadian’s quest to use Scripture to help sell climate science: White evangelical Protestants are the group least like to believe in climate change. So in America, Katharine Hayhoe is setting out to change that.”

In the process of telling her faith-science narrative, Gillis laid out Hayhoe’s credentials in the climate science field. He noted:

The 43-year-old PhD. made her name building localized statistical models (“downscaling,” in the argot of her field), which governments from California to Massachusetts use to prepare for a future onslaught of drought, or unprecedented rainfall. She currently heads up the Climate Science Center of Texas Tech University in Lubbock, and has contributed to reports of the Intergovernmental Panel on Climate Change that won the 2007 Nobel Peace Prize. Later this month, she’ll appear at the UN Climate Change Conference in Paris on behalf of the Union of Concerned Scientists, a 46-year-old organization devoted to promoting a healthier, safer planet. [For the record, she did appear and continues to be interviewed widely on the basis of her exposure there.]

He noted that not all had been easy for her, in working for that balance. Downsides have included hate e-mail following her appearance on Pat Robertson’s Christian Broadcasting Network (CBN).

Recounting an appearance before a faith-based crowd in the buckle of the Texas Bible belt, Gillis recalls:

In Midland, she opens her case for human-caused global warming with charts and graphs, then silences the crowd with a map showing the disproportionate impact of climate change on the world’s poorest. “We are told to love others as Christ loved us,” she says. “How did Christ love us? Was it with a ‘me first and you later’ attitude? It wasn’t.”

More heads bob, and more affirmative murmurs rise from the floor, and it’s here that Hayhoe shifts from an appeal to conscience to a call for action, enlisting her audience into a battle for the future of humanity. “How loving is it to ignore when developed countries do things that actively harm developing nations?” she asks, pausing to let the question sink in. “When people who have resources do things that harm people who do not, right here in our country?

“That’s why our Christian values are integral to how we treat this issue,” she tells the hushed assembly. “Far from holding us back, or making us doubt, or saying there’s nothing we can do, our values demand we be on the forefront of this issue. That’s what we as Christians are called to do.”

Beneath the approachability, though, lies her rock-solid conviction that faith and reason are compatible. Raised in a household where religion and empiricism peacefully coexisted, Hayhoe was inspired to pursue science by a father who taught the subject to high-schoolers, and who saw it as a gift from God. They were members of the Plymouth Brethren, a back-to-the-Bible offshoot of the Anglican Church considered moderate by the standards of American evangelicalism. Her parents took the Church’s ideals seriously, though, packing the family off to Colombia when Katharine was nine to teach and work as missionaries.

Yet theirs was a never a literalist interpretation of the Bible. As an undergrad at the University of Toronto, Hayhoe majored in astronomy and subscribed to scientific understandings of the age and origin of the universe. Only after her studies led her to the U.S. would she meet people who believed the Earth is young, or that evolutionary theory is a hoax. To this day, she navigates what she calls this “peculiarly American perspective” by limiting to 6,000 years the historical temperature data she shows when talking to religious audiences, because that’s how old some Christians believe the Earth to be. “I view myself as picking my way through a minefield, with one specific mine that I want to defuse,” she explains. “To get to it, I’m willing to pass by every other issue on which science and faith disagree.”