The Positive Difference of Islam

In the past 20 years, Muslims have had to deal with varieties of attention, stigmas, and stereotypes. As a response, they’ve had to develop mature ways to carve out and articulate their Canadian identity while maintaining their faith. As leaders in other faiths and beliefs will tell you, this is no easy feat! Luckily, there’s Imran Ally. 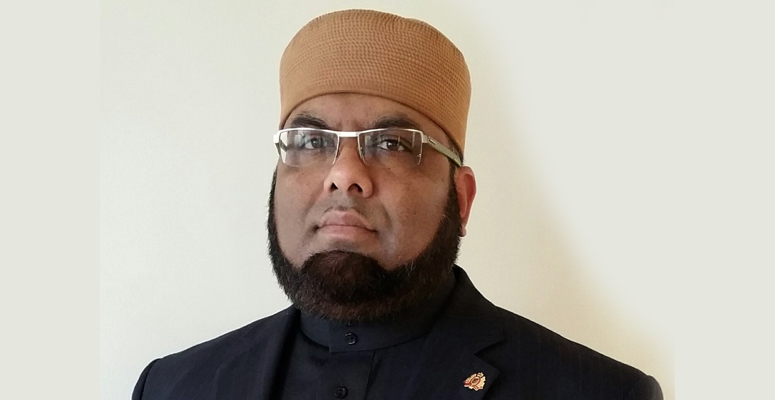 Imran Ally is a university graduate with a Bachelor of Arts degree in Islamic Studies and Arabic language. Currently, he’s the Imam and resident scholar (Shaykh) of the Toronto and Region Islamic Congregation (TARIC - Islamic Centre) where he continues in service dutifully since 2000. TARIC is among the largest mosques in the Greater Toronto Area (GTA) sitting on 2.2 acres and serving a population of almost 500,000 Muslims. Established on the northeast corner of two of the busiest highways in Canada, the centrally located mosque is a beautifully constructed building seen by all driving on the 401 while crossing the 400.

Imam Ally being among the longest-standing Imams in the GTA speaks volumes to his abilities and approval ratings from Muslims in Toronto. His charismatic delivery along with ability to establish meaningful and honest connections when speaking to crowds make him a sought after Imam to preside over weddings, community events, funerals, and other milestone occasions.

In his core role as an Imam, he is available, approachable, and personable – all with an aura of the prophetic teaching “...have mercy to those on earth, and the Lord of the Heavens will have mercy upon you.” His role encompasses being a religious guide, educator, counsellor, arbitrator, mediator, marriage officer, events coordinator and more. He humorously remarks that only one salary is attached to the many hats he wears! He has brought people back to the faith by demonstrating that being Muslim and Canadian are inextricable. His weekly (Friday) sermons are replete with Canadian values as well as promoting the esteemed gift of being a Muslim Canadian.

His interfaith service to the GTA keeps him quite active. Through his work, he is lauded for presenting balanced viewpoints on Islam which often strike common ground with other faiths and beliefs. Imam Ally continues to promote an approach to faith encouraging community service, interfaith dialogue, and social justice. He was requested to lead Muslim prayers and multi-faith memorial services within the GTA for the Quebec mosque shootings in January 2017.

Imam Ally also serves as a director, an advisor and a consultant on numerous boards involved in civic-engagement for which he has received considerable accolades and recognition. He deals bravely and decisively with difficult and unpleasant situations, making him a central personality whom his colleagues, congregation and the general community takes solace in rallying behind.

Furthermore, Imam Ally is stalwart in the field of Canadian chaplaincy. Over the years, his involvement in various chaplaincy disciplines includes law enforcement, health, sports and educational. Among the notable areas he has and continues to serve, are:

Imam Ally and his wife Kameeza enjoy a happy marriage and are blessed with three young sons (Musa, Yusuf, and Sauleh). In 2007, the Imam and his wife founded Yusuf’s Day of Hope (YDOH), a not-for-profit fundraising initiative named after their second son, who suffers from a rare genetic disorder. What started off as a humble undertaking of ‘giving back’ – YDOH has entered its 11th year and has currently raised over $150,000 for the Norman Saunders Complex Care Initiative at the Hospital for Sick Children in Toronto. This initiative supports research and academic activity related to the clinical care of children with multiple and complex health challenges.

In a typical address to Muslim gatherings, the Imam is popularly known for saying “if you’re not making a positive difference in your community – there is a deficiency in your understanding and practice of Islam.”