St. Andrew’s Roman Catholic Parish in Oakville, Ontario celebrated its 175th anniversary two years ago through a fundraising campaign to help the Diocese of Cornerbrook and Labrador, whose priests spend much of their time traveling to far-flung missions to minister to the faithful. This was a fitting means of celebrating their anniversary since St. Andrew’s story began nearly 200 years ago as a mission parish, almost four decades before Oakville became a municipality and five decades before Confederation. 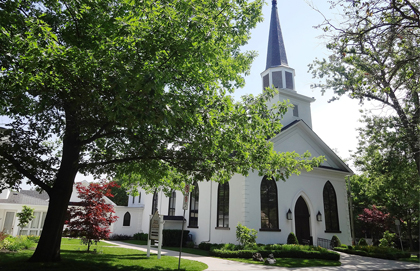 In 1819, two young Irish settlers, Bartholomew O’Connor and Charles O’Hara, travelled 40 miles to Dundas to persuade a Father O’Reilly to come and say Mass for them in O’Hara’s log cabin in Trafalgar Township. Over the next 20 years, the pioneer families in Trafalgar and what was to become Oakville worked to raise funds to build a church. In 1840, the colonial-style frame building was built by local Catholic craftsmen on land donated by the Presbyterian founder of the town, William Chisholm.

For the next 19 years, St. Andrew’s continued as a mission served by priests who visited the church to say Mass about once every five weeks. They were a hardy and dedicated breed of men.  Through all seasons of the year, they had to ride their horses along forest trails, carrying with them an altar stone, linens, vessels, books, and vestments. Parishioners who wanted to attend Mass more frequently were also a sturdy lot as they had to make a two-day trek back and forth to Dundas, the nearest church.  Beginning in 1859 when St. Andrew’s had a resident pastor, and for the next 100 years, St. Andrew’s became the mother church to serve other mission communities in Burlington, Milton, and Trafalgar.

Situated on the Waterfront Trail and a stone’s throw from Lake Ontario, the church is open everyday to the many visitors who walk past. It provides a quiet place for a moment’s rest in its bright interior, lit through stained glass windows that are atypically large for a pioneer church. Perhaps it is because people have worshipped for 177 years in this, the only original, pre-confederation church structure still standing in the Town of Oakville, that visitors and regular parishioners feel a special spirit when they enter this old, but well-maintained building.

Certainly faith and the work of the spirit played a part in the captivating account of the erecting of the church’s 150-foot tall steeple. According to a note in the Oakville Museum’s archives, John Cavin, like his fellow carpenters, gave freely of his time to help erect the church and was engaged high up the steeple when the rope that went though his pulley was let loose by a workman below and left him stranded above: “With quick thought and presence of mind he took off his stocking, unravelled it, let it down and the ground men tied the rope to it. John was soon down for dinner.”  Others involved in the building of the church and its interior furnishings were the McDermotts, the O’Boyles, the O’Connors, the O’Shaughnessys, the Rigneys, the Sweeneys, and Captain Boylan.

St. Andrew’s was built to accommodate 200; but in 1870, under the auspices of their first resident pastor Father Jeremiah Ryan, the church was enlarged to seat 300. Three ornate altars and communion rails, lovingly created by cabinetmaker and parishioner James O’Connor, were likely installed at this time.

Father Ryan was an energetic man who served the parish well, not only as a spiritual leader but also as an important leader in the history of education in the Province of Ontario at the elementary, secondary, and post-secondary levels. As soon as he arrived in 1859, Father Ryan set about building a two-storey, clapboard-clad frame school, measuring 24 by 36 feet. Opening in 1860 with an enrolment of 107 children, St. Mary’s School was the earliest Catholic school to be built in all of Halton, Peel, and Dufferin Counties.  Father Ryan was also an astute businessman who purchased several properties in Brantford and Oakville.  On one of the lots across from the church, he built a convent for the sisters teaching at the school. For a brief while in the late nineteenth century, this convent-home also acted as a school for children of all denominations.

When he died, Father Ryan’s estate passed to his two nephews, also priests. With this legacy, one of the nephews, Father Lawrence Brennan, bought a 50-acre piece of land in Toronto, east of Bathurst, between St. Clair and Eglinton Avenues. This property became the home to St. Michael’s College School, and part of the land was sold off and financed the building of the Kelly Library at the University of St. Michael’s College. The legacy of the other nephew, Father Patrick Ryan, through the Diocese of Hamilton, financed the building of the new two-storey brick building that replaced the original St. Mary’s in 1930. The Ryan Ward in Hamilton’s St. Joseph’s Hospital and many bursaries at St. Michael’s University were also fruits of Father Ryan’s efforts.

For a church as old as St. Andrew’s, it is not surprising that the years have brought many different ideas about renovations and refurbishments. What is remarkable is that despite the involvement of many pastors and artisans over the past two centuries, there is a beautiful unity, inspired by the same spirit. For example, the earliest-made windows that were created by the well-known Canadian studio of Napoleon Theodore Lyon are thematically and aesthetically linked with the four large windows created by Toronto’s Meikle and Son Studio, as well as the small windows created by Studio Flos, Artisan Glass, and McCauslands.

The church saw two major extensions after 1870. After the war and when the Ford Motor Company opened its assembly plant in Oakville in the early fifties, the population of Oakville greatly increased. To accommodate the newcomers, both St. Andrew’s and St. Mary’s were more than doubled in size between 1950 and 1953.  Then again in 2009, the church was enlarged to add still more seating, accessible washrooms, as well as a basement meeting room; but the changes were respectfully made to integrate with the original building.

Other notable renovations occurred in 1916 and 1980. In 1916, a prominent Anglican businessman and neighbour of the church, W.S. Davis, donated the new chandelier that likely introduced the first electrical light into the church. Despite the large windows, a pioneer church like St. Andrew’s (without gas or electrical light) would have been painted in hues that made the most of the natural light.  It was with this in mind that, during the 1980 renovation, church specialist Murray McCance chose light pigments, like those that would have been used during the mid-nineteenth century. McCance also helped the parish to unite the changes required by the Second Vatican Council with the historical design of the church, which was a transitional one between classicism and the Gothic Revival.  The “Christmas Card” exterior strongly resembles the neo-classical churches built during the eighteenth and early nineteenth centuries, but the windows have Gothic arches.  McCance’s suggestions for furnishings and other interior design details helped the parish to bring together all these various elements with simplicity and elegance.

With a church and a school, St. Andrew’s became a centre of social and cultural life, not only for Catholics, but for the entire community.  The fact that the Presbyterian town founder donated the land and that an Anglican businessman donated electrical fixtures (as well as indoor plumbing for the school) emphasizes the long history of cross-denominational friendship fostered between the community of St. Andrew’s and the many other church-going residents of Oakville. Long before there was an indoor arena in town, the parish flooded a portion of their spacious grounds for an ice rink where they welcomed children and adults from all over town for skating, hockey, and even a masquerade ice-folly.  Church softball and carpet-bowling teams also played with groups from other town and church organizations. 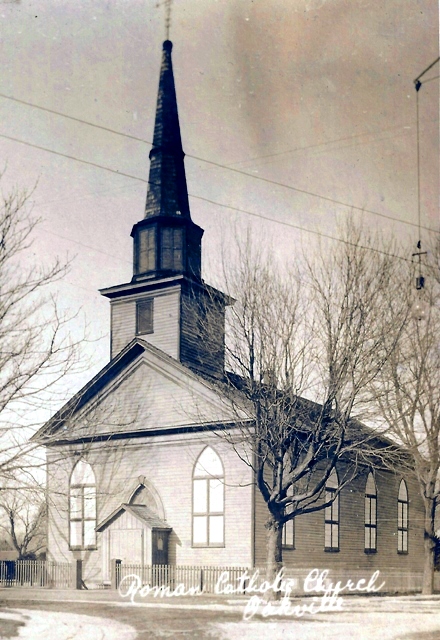 Every July, beginning at least as early as 1896 if not before, St. Andrew’s would also host an annual garden party. Coverage in the Oakville Record-Star during the 1920s and 1930s suggest why the popular event drew large crowds:  the Presbytery grounds with their “brilliantly illuminated lawns” and “twinkling lights” took on the appearance of a “fairy land.” The ladies managed food booths offering everything from ice cream and fudge to more substantial fare; and the gentlemen operated the games booths which provided a variety of diversions from darts and a fish pond to housie-housie (bingo). Professional singers, radio personalities, comedians, and even jugglers were hired from faraway places like the Chicago Opera Company and the New York World’s Fair to perform at the festival. In the 1970s, St. Andrew’s participated in the town’s version of this event, now-called Midnight Madness and hosted by the Downtown Business Association.  In June, the parish still holds an annual strawberry tea hosted by the church’s children’s choir; and last October, they held an extraordinary fall bazaar and white-elephant sale that attracted guests and avid garage-sale devotees from across the region.  The parish also participates in Doors Open to welcome still more visitors into their home.

St. Andrew’s has played an important role in the musical life of the town. It was probably in the late nineteenth century that the parish saved to purchase a Casavant organ. As early as 1899, the local newspaper was reporting on the liturgical music at the church. That Easter morning, accompanied by Father Shaughnessy’s sister at the organ, the choir sang Zangl’s Mass in C Major; and in the evening, soloists and a quartet from the choir sang musical vespers. Father Savage, pastor from 1909 to 1933 and head of Oakville’s music society, helped to train and direct the choir. It was also during the 1920s that some newly-arrived young Englishmen like William Grammell and Fred Collier came to St. Andrew’s and joined the music ministry. Fred Collier came to Oakville to help run the Frederick Harris Music Company, which moved to the town in 1924 and became the new headquarters of the renowned English company founded in 1904. Parishioners who worked at Frederick Harris went on to open their own music stores in Oakville and these now supply most of the sheet music needed by the region’s church and other musical groups.

For many years the church has boasted an excellent children’s choir, led by talented directors including Lillian McCartney, Mary Smithbower, Diana Isherwood, and Sarah Zbogar. In the past fifty years, the adult choirs led by Tim Elia, Brian Isherwood, Jerzy Cichocki, and Charles Demuynck have not only provided fine music for the liturgies at the church, but they have also contributed to the musical life of the Oakville community. Choir members have performed at many community events, staged a production of Amahl and the Night Visitors at the Oakville Centre, and in the Jubilee Year 2000 invited choristers from all over the region to form a large ecumenical choir, which has since grown into Masterworks of Oakville Choir and Orchestra.

In his exhortation on The Joy of the Gospel, Pope Francis writes, “Our faith in Christ, who became poor, and was always close to the poor and the outcast, is the basis of our concern for the integral development of society’s most neglected members.” In its joyful celebration of its 175th anniversary, St. Andrew’s chose the motto, “Faith in Action”.  For two centuries, the faithful people of this parish have helped their neighbours build their own homes and places of worship. This past December, the current pastor Father Con O’Mahony and the parish welcomed a family of seven Syrian refugees. St. Andrew’s began as a parish for poor, hardworking pioneers who two hundred years ago came to Upper Canada to begin a new life, and in faith it looks forward to the next century of fruitful life in Canada.