Skip to main content
Home What we do Cabinet of Canadians Dr. Colin Saldanha 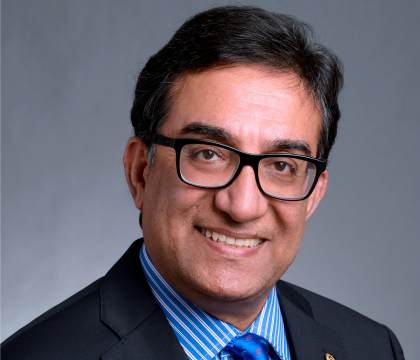 Dr. Colin Saldanha is presently the Board Chair of the Trillium Health Partners Foundation, which serves one of Canada’s largest community hospitals.  Dr. Saldanha is a Family Physician who has a long and distinguished history of public service and has been a staunch advocate for the marginalized members of our society, primarily in the areas of social justice and mental health.

As a committed and tireless community leader, he has served as Chair of the Peel Police Services board, Mississauga Board of Trade, United Way, Canadian Association of Police Boards, and the Health Policy Committee of the Ontario Chamber of Commerce.  He has also been a member of the Board of Trustees of the Royal Ontario Museum and was a member of the fundraising cabinet of the Hazel McCallion Academic Learning Centre of the University of Toronto, Mississauga campus.

Dr. Saldanha has also served as Chair of the Mental Health Task Force for the Mississauga Halton LINH and Co-Chair of the System Access Model in the development of new psychiatric care model.  As Chair of the Public Policy Committee of United Way of Peel Region he initiated a non-pharmacological approach to mental health.

As a man of faith, Dr. Saldanha has been instrumental in initiating and establishing a Faith Group that has raised significant amount of money towards assisting the youth in living their faith in the public square.  He has chaired numerous forums including “Faith and Politics," “Coward or Courageous Christian,” and “Persecution of Religious Minorities."  In 2014 Dr. Saldanha was conferred with a Papal Knighthood when he was received into the Equestrian Order of the Holy Sepulchre of Jerusalem.

In recognition of his longstanding service to the community, Dr. Saldanha has received several commendations.  He was honoured with the Sir Charles Tupper Award presented by the Canadian Medical Association for Political Action and Advocacy, the Governor General’s Medal for Volunteerism, the Queen’s Diamond Jubilee Medal, the Sam McCallion Award for community service by the Mississauga Board of Trade, and the Paul Harris Award by Rotary International.  Dr. Saldanha was selected as the Mississauga Citizen of the Year 2010. In November 2016, Dr. Saldanha will be inducted into the Mississauga Legends Row.