Canadians Split on Influence of Religion on Politics and Public Issues 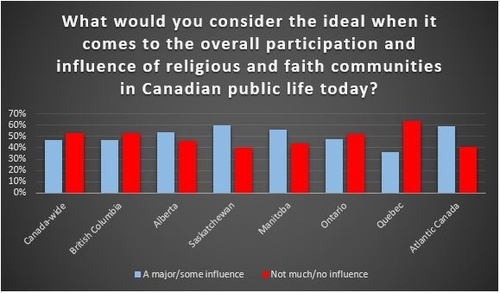 “Clearly, there is room in a diverse and tolerant nation for voices of faith in the Canadian public square today,” says Ray Pennings, Cardus Executive Vice President. “Those in authority have an obligation to welcome those voices, while religious communities also have an obligation to make constructive and responsible contributions to politics and public policy.”

Interestingly, Canadians are just as divided on the question of whether religious communities and faith groups are relevant to addressing social issues and challenges today. While 52% of Canadians say religious communities and faith groups are “becoming less relevant” or are “no longer relevant,” 48% say they’re “as relevant as ever” or “more relevant than ever.”

The Angus Reid Institute conducted an online survey from October 16 – 23, 2017, among a representative randomized sample of 1,972 Canadian adults who are members of the Angus Reid Forum. For comparison purposes only, a probability sample of this size would carry a margin of error of +/- 2.2 percentage points, 19 times out of 20. Discrepancies in or between totals are due to rounding. The survey was conducted in partnership with Faith in Canada 150 (a Cardus project) and paid for jointly by ARI and Faith in Canada 150.