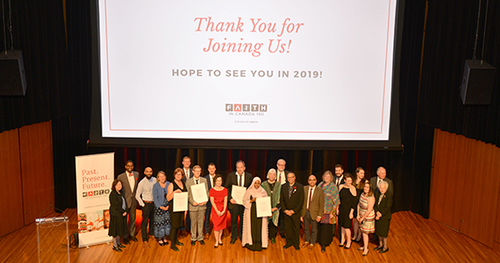 TORONTO, ON – Two vibrant young Canadians are now the first ever winners of the Ross and Davis Mitchell Prize for Faith and Writing – a Faith in Canada 150 project, backed by think tank Cardus.

POETRY WINNER
Rowda Mohamud, a Somali-born Canadian-Muslim poet from Oakville ON took home a $10,000 prize for her suite of poems entitled Please Find Yourself a Space. Shane Nielson, a poet, physician, literary critic, and PhD candidate at McMaster University won the $2,500 prize as runner-up in the poetry category for his suite, Loss Sonnets. Susan Fish, a writer and editor from Waterloo, ON took home the $2,500 prize as short story runner-up for Easter Water.

The work of the winners and runners-up will be featured in an anthology to be published in 2018.

"The judges carefully weighed the high volume of submissions and managed to reach consensus on a shortlist, runner up, and winner for each category," said Doug Sikkema, Mitchell Prize project lead. "And while we will take the requisite time to celebrate these folks, I should acknowledge that the many unknown writers, perhaps some who saw the prize advertised and decided to pick up a pen and paper for the first time, are what make this prize a real success. Our hope was, and continues to be, that the vital role religion plays for so many Canadians today will be shared, not suppressed."

The Mitchell Prize was designed to give voice to Canadians who recognize and write about the powerful truth, goodness, and beauty that faith brings to Canadian culture. More specifically, this award calls attention to our poets and short story writers from all across this nation whose faith animates their imagination and ours.

An august panel of judges evaluated around 250 entries to the Mitchell Prize.

Judging the short story category were:

Judging the poetry suite category were: