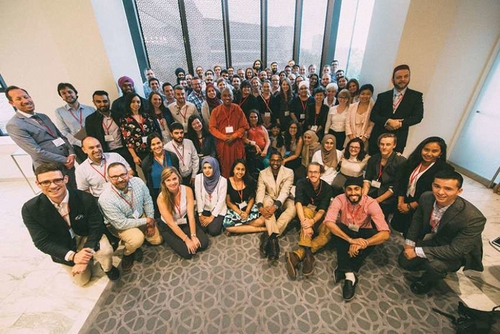 Dozens of today’s potential leaders of tomorrow recently gathered in the nation’s capital for a faithbased summit aimed specifically at the millennial generation.

The 75 young men and women were picked from all parts of the country to take part in the threeday event discussing the role of faith in today’s society and the importance of religious freedom as part of Canadian society.

The event, called the Millennial Summit, was organized by the Faith In Canada 150 group, which has been holding a series of meetings and broad-based religious discussions as part of the celebration of Canada’s 150th birthday.

All of the participants were born between 1980 and 2000 and came from all types of faith backgrounds.

Hannah Marazzi, project lead for the summit, said it was a perfect opportunity to gather those faithful leaders of tomorrow who will play a big part in shaping the country’s next 150 years.

“It was a fantastic time,” said Marazzi. “It was so very rich. We had this diverse group of young people addressing major questions such as:

‘ What does it mean to be a Canadian of faith?’

‘Is there a role and place for faith in public life?

‘How do we move forward in faith and friendship?’ ”

She said it would have been remiss not to challenge and engage this generation and great efforts were made to make sure young people from all faiths were included in the summit.

“We also wanted representation within those communities, as well. There are different branches of Judaism, various manifestations of Islam and different denominations of Christianity. We wanted the full spectrum.”

Among the 75 delegates was Christopher Primeau, vice-president for advancement at Calgary’s Christian Ambrose University.

Primeau said that, when he first heard about the Ottawa summit, he was determined to get involved. “To be able to look forward as well as to look back was a great milestone in a year of milestones for our great nation,” he said. “Where is Canada at when it comes to genuine pluralism and the acceptance of diversity in the faith community? It was an opportunity for emerging leaders in the faith community to come together, putting their differences aside and discuss how to create a society around this pluralism and this diversity.

“This experiment called Canada is doing very well and it’s one of the greatest, if not the greatest, example of a nation state in the 21st century. But there’s lots more work to be done, not only with our Indigenous population, which is often not involved in the civil discourse, but also prejudice is still an issue to wrestle with as individuals and as a nation.”

Primeau, 31, believes the millennial generation may be less religious than earlier generations, yet is more spiritual.

“Millennials are not necessarily subscribing to the religious patterns that our parents’ generation may have had, but we’re finding our own way and not letting go of our faith and values,” he said. “Yes, faith is important to millennials, but it is not as ideological.”

Primeau is delighted to see youngsters in Calgary embrace inter- faith friendships. Meanwhile, he believes the city leads the nation in such attitudes.

“Calgary is much more inclusive than many parts of Canada,” he said. “Walk into any public school here and what you’ll see is individuals from a diversity of backgrounds. You go into those schools and you see pluralism at work.”

Marazzi, at age 24, is also part of that millennial generation. She hopes and believes the conversations that started at the summit will continue once the participants are back in their home cities and towns across the country

“The No. 1 thing they said they came away from the summit with was a sense of hope about the future ... that they’re not alone and the only people considering these questions.”

You can read the article